We are proud to showcase our Gold Award winning project Seaside Sustainability, recognized by an esteemed panel of Long Island judges, for its unique environmentally sensitive solution in combination with a dynamic seaside aesthetic.
A waterfront property can be captivating, entertaining, and breathtaking while showcasing the wonders of nature and her natural amenities.  However, there are risks associated with living on the water’s edge. 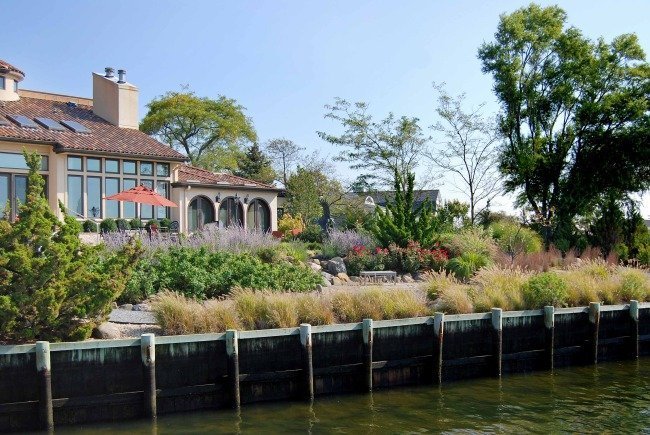 Here is where you can watch the tides go by in a secluded seating area that is encapsulated by an aesthetically pleasing and functional design.

As many people know, in 2012, Hurricane Sandy brought with it a wave of destruction and chaos.  Tidal surges and winds were the major environmental forces that have now reshaped the landscape of this Hewlett Harbor property and many communities throughout the south shore of Long Island.

The waterfront perspective has been completely re-imagined into a passive use garden. A Hollywood juniper survived the storm and stands strong in the background.

A landscape we designed many years ago was one of the many in Sandy’s devastating path.   Tidal surge and prolonged salt water inundation during the storm compromised much of the plantings and all of the lawn.  Large trees were uprooted by strong winds and flooding was a major issue on this site. A once pristine waterfront retreat had become a horticultural nightmare and remained susceptible to future damage.  Disheartened by the damage to their property, the homeowners were contemplating selling their home to cut their losses.  Our professional design team worked with the homeowner to provide a sustainable solution by creating a more resilient landscape which they were going to use as a selling point when the house eventually went on the market.  The homeowner’s main concern was flooding in the lower level of their home and keeping the property lawn-free.  Our design initiative was to create a more sustainable landscape by implementing natural stormwater management practices, while being sensitive to the homeowner’s naturalistic and organic needs.The backyard has now become a series of interconnected spaces with an emphasis on planting. A revitalized waterfront landscape with an organic vegetable garden and gravel walkways. 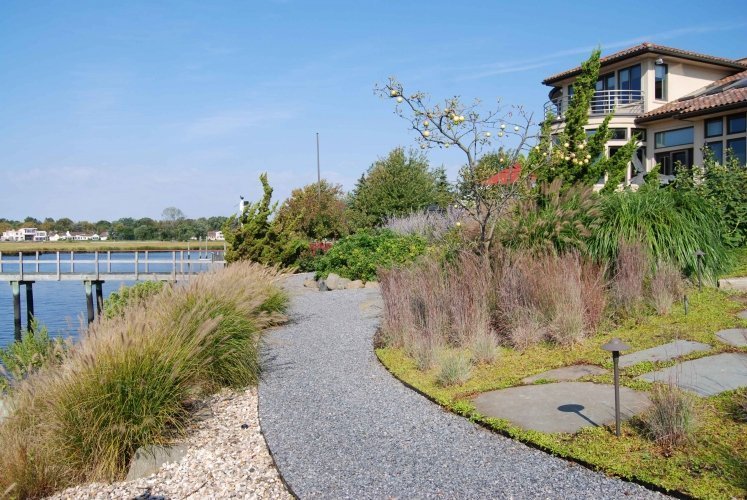 A revived natural landscape shines through with a lush plantscape and ornamental birdhouse.The evolution of the planting design on the property was a result of input from our client and consideration of the coastal environment.  We planted trees, shrubs and perennials that are salt and wind tolerant that will endure many of nature’s challenges while offering a variety of colors and textures throughout the year.  Salt tolerant evergreens such as Eastern Red Cedar and Hollywood Juniper were planted for privacy screening on both sides of the property without compromising the spectacular water views.  Shrubs such as Shore Juniper and Winterberry were planted along with Dwarf Fountain Grass and Little Bluestem along the water’s edge to frame and enhance the water views from the house, patios, and bulkhead sitting areas.  We repurposed an existing formal rose garden that was trashed by the storm into a bountiful organic vegetable garden within a circular paver design to retain interest during all seasons.

These landscape renovations were recently put to the ultimate test during a record rainfall when the high tide breached the bulkhead and started flooding our client’s landscape.  As the hours moved on and the tide moved in, all floodwater that moved into the site was diverted away from the house and infiltrated the ground as planned.  The success of a sustainable landscape can only be measured during extreme weather conditions, and this design proved its effectiveness and resiliency.

The final overview of a resilient landscape design that combines both form and function to create a lush and entertaining waterfront lifestyle.